Reliability is an important prerequisite for accepting the quality of a test.

This table below demonstrates the reliability of the AMS across countries and cultures (measured with Cronbach’s Alpha). The consistency coefficients varied between 0.6 and 0.9 across countries for the total score, as well the three subscales. 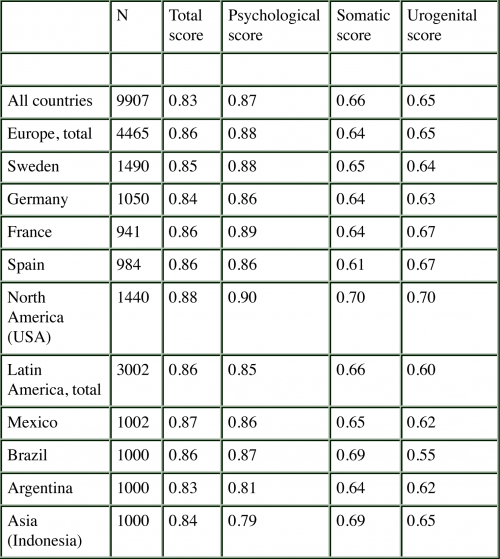 High correlation coefficients were also observed for the three domains across the regions studied. In the only Asian country we studied, Indonesia, the test-retest reliability is low (0.5). However, the assessments were based on small numbers, i.e., can be judged as preliminary information only 9, 10.

Evidence for validity is provided in a stepwise process.

Similar to reliability that assesses the consistency of measurement, the validity estimates if a QoL scale really measures what it intends to measure.

But whereas reliability can be determined straight forward with very few indicators, the validity is almost always a continuous process (construct validation). It is a process of accumulating evidence for a valid measurement of what is purposed.

There are various indicators for validity in the such as:

Internal structure of the MRS across countries

The first factorial analysis in 1996 was applied to identify the dimensions of the scale. Three dimensions of symptoms/complaints were identified 2: a psychological, a somato-vegetative, and a urogenital factor that explained 58.8% of the total variance.

A large, multinational survey in nine countries on four continents was analysed to answer the question: surprisingly similar factor loadings of the 11 items of the 3 domains of the MRS were observed (Table). 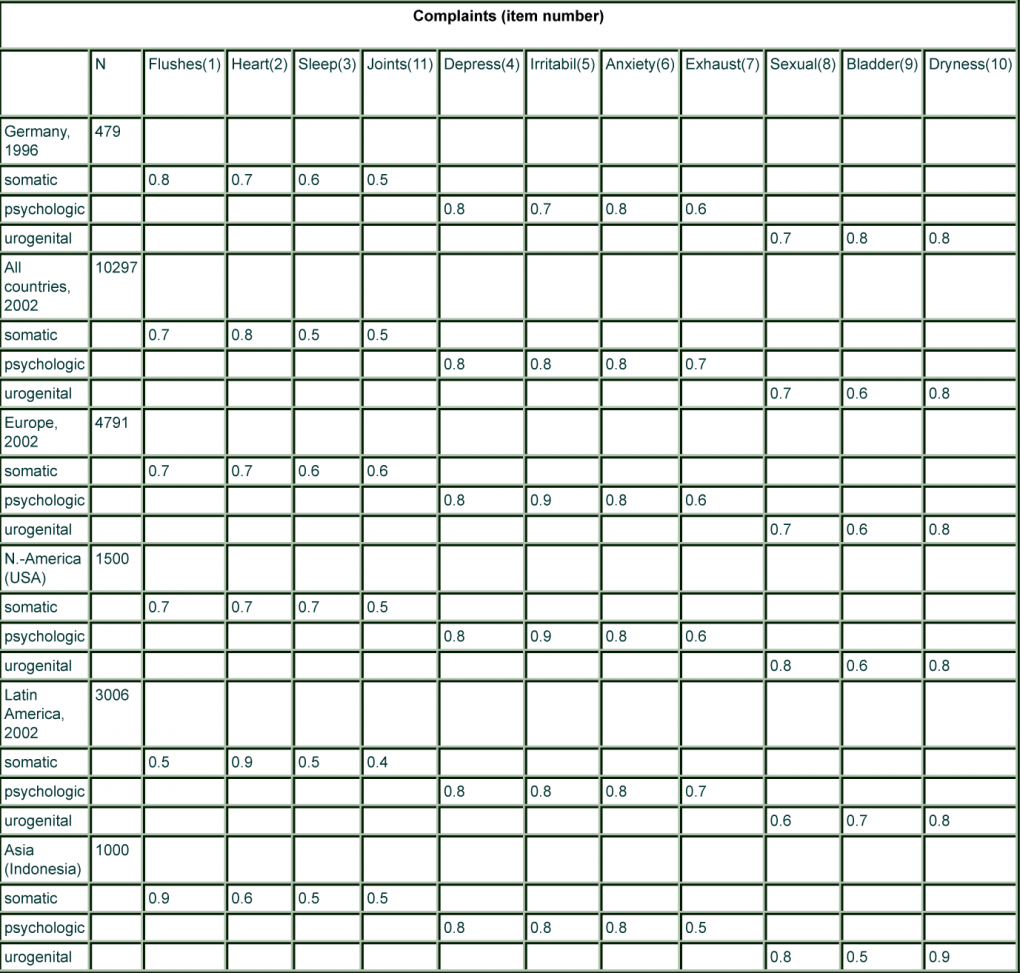 Similar results were seen for the individual countries of the respective regions. Although the prevalence of menopausal symptoms may slightly differ among regions/cultures (see later), the structure of complaints/symptoms seems similar. This suggests that the scale measures constantly the same phenomenon which speaks in favour of the translation/cultural adaptation of the scale.

However, there are also signals that the domains could be somewhat overlapping and not entirely independent as the statistical model promised.

The general agreement in the internal structure of the MRS scale across country groups, even accepting the possibility of slight differences in two items, suggests that the scale can very well be used in clinical studies in different countries, because intra-individual comparisons over time (before/after treatment) will be the main criterion which might not be affected by potential slight differences in the patient reported outcome structure.

To All Diagnostic Tools

We are a partner centre of the ENCePP scientific network which is coordinated by the European Medicines Agency. We are dedicated to excellence in research by adhering to the ENCePP Guide on Methodological Standards and promoting scientific independence and transparency. We register studies in the ENCePP E-Register of Studies, a publicly accessible resource for the registration of pharmacoepidemiological and pharmacovigilance studies.